Bologna and Milan, hindsight is 20/20

Upon arriving in Bologna, north of Florence, I attempted to check in at Bologna Bed and Breakfast. After ringing the doorbell several times and standing around for 10 minutes, I went across the street to an internet cafe rather than trying to explore the city while carrying my big backpack in the hot summer weather. From 11am to 12pm I surfed the internet, then went back across the street to try the doorbell again. Still nothing. Finally I wandered towards the city center and found a restaurant to eat lunch at. I ordered a beer and a sandwich and sat there for a very long time reading my kindle app on my smartphone. Finally just before 2pm I figured it should be safe to head back to the bed and breakfast. Yet again, no one answered the bell. Eventually I saw some other guests coming back from lunch, and they let me in. Then I sat in the entryway of the apartment for over an hour, waiting for someone, anyone, who could check me in. I was scared to leave in case I wouldn’t be able to get back in. Then two more guests showed up, and they had cell service, so they were able to call the phone number of the owner. Finally she showed up and checked everyone in and gave us keys. Now it was almost 4pm and I hadn’t seen any of the city.

I explored the city, which looked pretty dilapidated and practically abandoned. There were shuttered shops everywhere. I experienced some minor street harassment here. I was walking on the sidewalk and I heard a guy walking a few paces behind me say “Ciao, bella!” I didn’t alter my speed, I didn’t look at him, I just kept walking. He sped up until he was walking in step with me and said it again. I turned to look at him, my face completely expressionless, then looked forward again, still walking at the same relaxed pace. He said “Do you speak English? You are very beautiful.” When I still said and did nothing, he shouted “Respond!!” but I just kept walking. Assholes like that just want to make you uncomfortable. They know they’re annoying you, and they want to see it in your face and your actions. I was doing my best to show him that he was nothing to me, not even worth telling him to leave me alone. After a few more seconds of no response, he turned a corner and left.

I found a nice restaurant to eat dinner at, and it was definitely one of the more enjoyable meals of the trip. Bologna is known as one of the gastronomy capitols of Italy, and it didn’t let me down. The pasta was absolutely delicious, as well as the wine and the tiramisu. Yum yum!

I explored the town a bit more, enjoying the sunset, people watching. On the way back to the hotel I got some gelato – white chocolate with black cherries. I think this might have been the best gelato I’ve had in my life. It was simply amazing.

Finally I went to sleep on an uncomfortable and overpriced bed, in a bed and breakfast with no breakfast and no reception. At least it was only one night.

Continue reading after the pictures to hear about Milan. 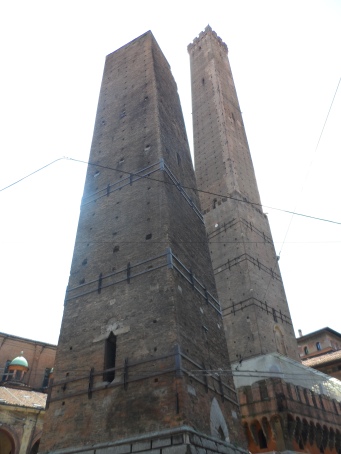 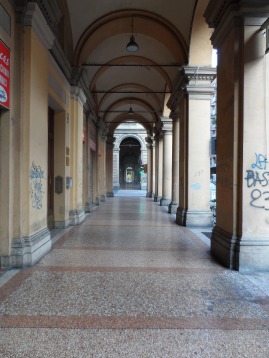 Milan, what can I say? I scheduled a long layover here just to see Leonardo Da Vinci’s “Last Supper”. I got off the train and headed straight for the subway. Upon arriving at the church and seeing a sign reading “Tickets to see The Last Supper today are SOLD OUT” I smiled and handed the lady behind the desk my pre-paid ticket, and she waved me right past the small group of disappointed tourists. Seeing the painting was very interesting. You can tell it used to be a truly stunning work before it started to fade. Da Vinci didn’t want to use a true “fresco” technique because it required painting quickly and then not being able to touch up old sections. He preferred to work at a slower pace and do touch ups. Because of this, the painting is severely faded and the room has very tight climate control to prevent further fading.

After that, I walked to the Cathedral. It’s very beautiful from the outside, such a brilliant white color. I didn’t go inside because most cathedrals look pretty much the same, so why give more money to an evil church that protects child molesters and actively tries to keep condoms out of developing countries?

Finally, I took the metro back to the train station. A man got on at the same stop as me and he was giving me strange vibes. He had a coat slug over his arm, even though it was 90F out. Strange. And he kept adjusting his position, holding this handhold and then that handhold, shifting his feet, moving slightly closer to me and then turning to the side and then holding a different handhold. He was doing this for two reasons. First, to keep me distracted and looking at him and his strange actions, and second, to force me to change my handholds. He was trying to rearrange me into an easy position for his partner to pickpocket me. His partner was standing behind me and I hadn’t noticed him. Then, I randomly happened to look down at the right moment, and I saw long, dirty, spindly fingers trying to make their way inside my purse! They weren’t actually inside my purse. They had chosen someone who bought a purse specifically because it is hard for someone to open it without me noticing. There is literally no possible way they could have gotten anything out of my purse without me catching them. The same second I looked down, the subway doors opened and it was my stop. I glared really hard at both of the men, but I figured speaking in English wouldn’t help at all. So I just glared really hard and felt glad that at least they hadn’t targeted someone else and been successful.

Then I got on the train and headed for Interlaken. Next travel post – Switzerland’s Jungfrau region, an absolute highlight of my entire 6 week trip.