After my grandmother and brother spent a few days with me in Madrid, we headed to Italy. Venice was our first stop. We only had about 1 and a quarter days here, but it’s a very beautiful city and I enjoyed it a lot.

The first day, we took a metro to the airport, then flew to Milan, then took a bus to the central train station, then took a long train to Venice, then took a vaporetto (waterbus) to our hotel. After check-in, it was time for dinner and we headed out to find a restaurant. 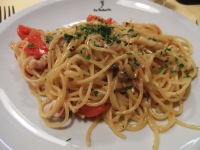 View from our hotel window

Grandma and Richard went to bed early, while I explored for about an hour, finding the Bridge of Sighs, St Mark’s Square, and the Rialto Bridge.

View of the Grand Canal from the Rialto Bridge

View of the Grand Canal from the Rialto Bridge

Early the next morning we headed to St. Mark’s Square, which is the main square of the city.

St. Mark’s Basilica is a really cool and unique cathedral. Construction began about 900 years ago, and was slowly built bit by bit. Every time a ship returned from some far-off land, it brought some new decoration or piece of marble. That’s why the styles are so mixed. It’s like a patchwork quilt of artifacts from different areas. It’s really fascinating and definitely one of the more interesting cathedrals I’ve seen. (Eventually they all start to blend together, but I like the story behind this one.) 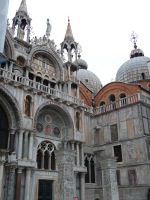 Of course Venice is most famous for its gondolas and its canals. The entire city is built on a shallow lagoon. There isn’t a single car in the entire city, even mail delivery and ambulance service happens by boat. You can navigate the city by walking on the sidewalks and crossing the bridges, but anything long distance requires some type of boat. It’s really unique. It was a bit strange listening to the “traffic” outside our hotel window, the glug-glug of an engine, followed by waves lapping at the walls of the building. 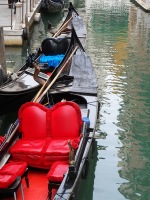 The normal water level is around 12ft, but sometimes (often) there is flooding. 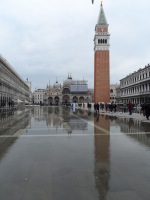 These shoes were specially designed to wear during floods! 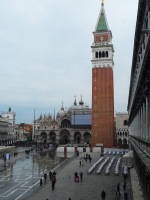 I think Venice is the most touristy city I’ve been to yet, by far. It was hard to locate a shop that wasn’t geared towards tourists. And the main thing for sale – glass. Anything and everything, made out of beautiful glass. My grandma bought an adorable little see-through cat figurine with a goldfish inside it for my cousin. I got myself a necklace but aside from that I held back. 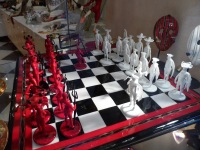 We explored the Doge’s Palace and the connected prison…

It really is quite a beautiful city… 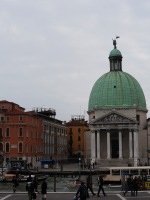 What a beautiful clock!

It’s some type of astrological calendar. 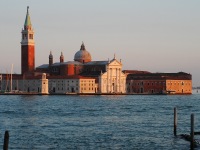 View of the Grand Canal from the Rialto Bridge:

The next morning, we took the waterbus up the Grand Canal back to the train station. We got some beautiful views again! 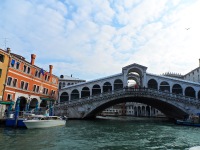